It’s the first day of the kids fall break, hooray!

So I took them to get their hair cut. which they loved. Then on to get some farm supplies at the Co-op (of course) and run to the grocery store so my poor starving family has something to eat.

It’s been a while since I’ve taken kids to the store. Since they are both in school now I go when I am blissfully alone. Its a lot less exciting by myself.

C1 is tired, and thus she is grouchy. So the grocery store was fun. (Not)

I don’t like it when a kid is grouchy so I am a little grouchy too. (Not my best attribute, but oh well)

Last item of the trip was mouthwash. I’m standing there figuring out which one is cheaper by the ounce. I’m not fast at math so it takes a minute and I’m focused on getting the best deal. After all – I’m thrifty and whatnot.

The kids are loitering about the buggy, pushing each other and spatting between themselves and I’m ignoring it.

I hear a rattle and feel a little shove.

I look over and it’s Caroline on the other side of the aisle. Holding the biggest ECONOMY BOX OF TROJAN CONDOMS there is to be had at the Kroger.

C1: *shakes the box* and in her loudest stage voice “MAMA! WHAT IS THIS?” (She shakes the box with every word)

I panicked, I almost laughed out loud…. and then I almost had an in-depth discussion in the Kroger (because what better time than when they ask … amiright?) but I didn’t think the lady right behind me was ready for that before 9am.

So I settled for “That’s personal care items. Please put it back, we don’t need it”

So she say (again, loudly and shaking the box punctuating her remarks) “Do we need it? We do personal care.” 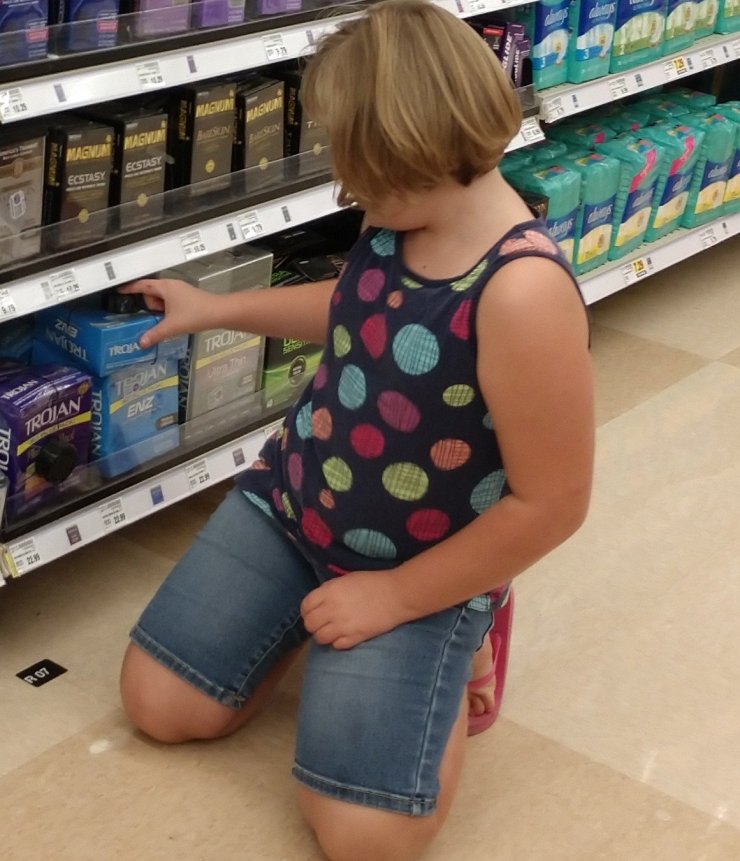 Thankfully that ended the discussion.

Then just as quickly it turned to complaints and whining about how hard/unfairrrr their kid-life is…I’d rather talk about the condoms I think.

We survived the store and we aren’t going anywhere else today, I hope.

Some days it’s laugh or cry…and today I’d rather laugh.

Y’all pray for me!

2 thoughts on “The things they don’t know yet.”