Thank the Lord, we got rain Saturday morning. Not a whole lot…but it definitely made a difference.
After church today, the girls and I were scrambling to get socks and jackets to go “help” him feed when his phone rang.

The girls and I had all noticed the change in his tone and were all waiting to hear what was wrong.

Ok. There are worse things than building fence.

Once we got there, it appeared it was going to take a while for the Lowe’s truck to be removed. It had gone off the right hand shoulder, over corrected, jack knifed and gone off the road through the fence. No one had been hurt.

So we had some time to kill while waiting. Lynn took the girls in the cab tractor to go feed a bale of hay, and I took the ancient 4-Wheeler to check on the cows in a different pasture.

I did get to see a day old baby calf, so that’s cool. 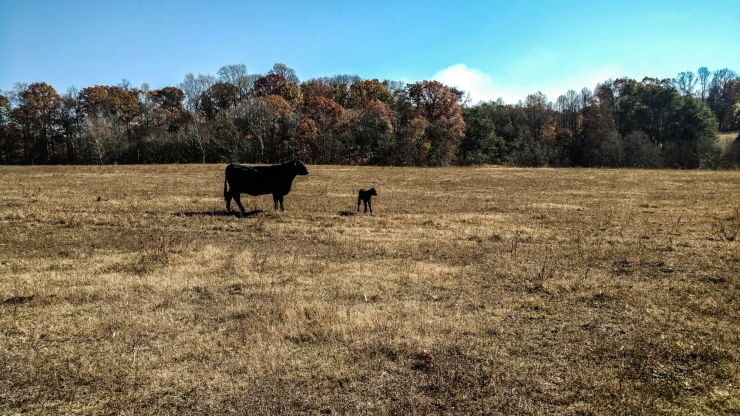 When we were done we talked to the Lowe’s manager, the unhappy driver, and the firemen who were there because the truck was leaking diesel. The store manager said “Yeah, we will have it moved in half an hour”

So we went to another rented farm to feed the heifers there. Because of the limited hay supply there is a bunk full of fermented corn byproduct. It is the byproduct of making sodas like coke. The cows LOVE it, and it is nutrient dense. Caroline loves the smell.

Claire rode with Lynn on the tractor and I walked with Caroline to open gates. Lynn offered the use of a 4-wheeler but after using the old one at the other farm, I declined. I’d rather walk.

Caroline chattered and I was trying to listen… and then I realized we had gotten in between a heifer and her calf. She wasn’t happy, and she was headed our direction head-up, fast.. Uh oh.

Caroline isnt quick or agile and neither am I. Had it been just me, I wouldn’t have ran – but being that I had my kid…I chose to err on the side of caution.

I saw a fence gap where the wire was loose and tucked Caroline up under my arm across my back, ran over to it, held the wires open and shoved her through. Then I wallowed through after her.

No longer perceiving us as a threat, the first-calf heifer retrieved her baby and we booked it back to the gate. Whew!

We got back an hour later and the truck was STILL where it was when we left so I got my father-in-law to take a family photo…since we were all as matching as we ever will be. (My friend Julie gave the girls a couple Carhart jackets her kids had grown out of…perfect farm kid present!)

Finally, 4 hours after the kids nap time was supposed to start we had a clear space to fix the fence.

It was a process that was going to take a little while so we put the kids in a truck to keep then out of the road.

When the overtired kids started throwing all the things that were IN the truck cab OUT the window I let them out to run in the field a minute.

Finally after 5pm we got home and reheated leftovers for dinner.

No surprise that the girls went to bed early tonight.

I’ve rarely seen them so tired.

Lynn is snoring on the couch and I think I’ll turn in soon too. We all count on our usual Sunday afternoon nap, but today it wasn’t to be.

But -we spent the day together…and together is our favorite place to be.

Have a great week friends!